More and more organizations are virtualizing desktops than ever before. VMWare and Citrix have managed to attract organizations by simplifying the deployment and maintained of VDI’s. Security teams have also pushed for deploying VDI’s since it gets data off the edge and can be stored in a secure, centralized datacenter.
Moreover, many organizations have benefited by implementing VDI since it provides huge savings on the company’s high energy bills. Traditional PC’s can consume a lot of energy, whereas VDI end users generally use a thin-client that uses much lesser energy.

However, VDI does come with its fair share of problems that could be hard to tackle since it has various moving parts. It can be summed up into the 2 major categories -

1)    Connection Issues –
When troubleshooting a connectivity issue, it is vital to narrow down the problem and eliminate as many potential causes as possible. Connection issues can be broken down into the following –
a)     Network Connectivity – Check the underlying network. For example, if a user complains on network issues, connect you laptop and see if you are able to connect to the network. Use basic tools such as ping and tracert to identify the point of failure.
In case the user is accessing the VDI remotely, identify if the issue is on the gateway or the VPN.
This also includes firewalls – Ensure the correct firewall ports are open.

b)    Application and Network Latency –
High Application and Network Latency usually cause sluggish behavior for the users. In case its Application latency, its important to understand the cause of the application latency. It could be the underlying infrastructure of the application server causing problems for your VDI environment.
If it’s a network latency issue, it could be related to bandwidth contention and it is important to identify the bottlenecks, such as the WAN links immeadiately.

b)    Process Monitoring –
It is critical to monitor the processes running in VM and understand which processes cause issues within your VDI. There could be defunct or zombie processes that need to be terminated immediately, which may cause severe end-user issues.
VDI troubleshooting can be simplified using the diagram below. The below diagram gives us an idea of where the problem lies in the infrastructure. 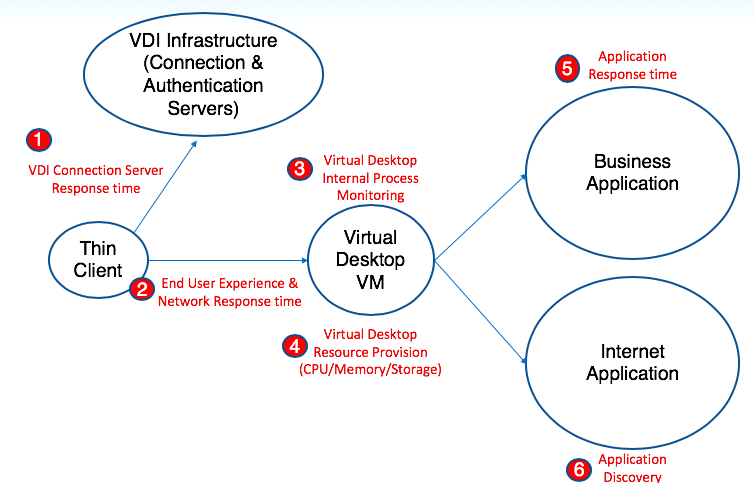 Tools such as Uila can help identify the bottlenecks causing VDI issues and pin-point the user in the right direction.

Note: This article was witten by Aditya Krishnan, TME at Uila and published originally on his personal blog site http://www.dcdummy.com/.