I just got back from VMUG Minneapolis Tuesday night, although I was tired with my flights getting changed, I had a great time while I was there!
As soon as I landed in Minneapolis I made it to the vBeers held at the Mall of America, to catch up over a couple of drinks with the vCommunity. I had some great conversations here with my vFriends and some catching up to do.

The last VMUG I was at we were still on vCenter 6.5. Now with 6.7 out, I had a lot of questions regarding the upgrades and hooks to hybrid. It is exciting to see the emphasis VMware has placed on the cloud.
Moreover, there was a deep dive session on VMware Cloud on AWS. I really wish I could have made it to learn more about this offering from VMware. I haven’t had the chance to play around with this yet and hoping I get to work with it over the weekend.
While manning the Uila booth at the VMUG expo hall, I had some insightful discussions with potential customers and partners.

1)    A lot of enterprises are looking to move to the hybrid cloud model. However, they are fearful to take that leap. They do not have the right tools that allows them to understand the steps necessary for migration.
2)    They require a single solution to monitor application workloads across the public and private layer, instead of looking at multiple tools.
3)    Most of the existing hybrid cloud environments have a very similar architecture. Their front-end web applications is generally placed on the public cloud and the high power servers such as databases, domain controllers are placed on-prem. Cost is still a major factor for enterprises planning to move to the cloud.

Finally, I also got to interview Matt Heldstab, the VMUG Minneapolis leader. The show had about 500 people registered and about 420 people attend, which was a high turnout! As I look forward to other VMUG’s this year, I would be glad to return and talk to the vFriends based out of Minneapolis.


You can watch the video from the link below - 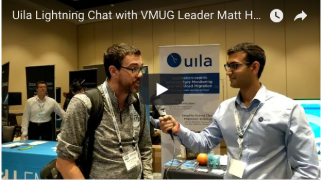