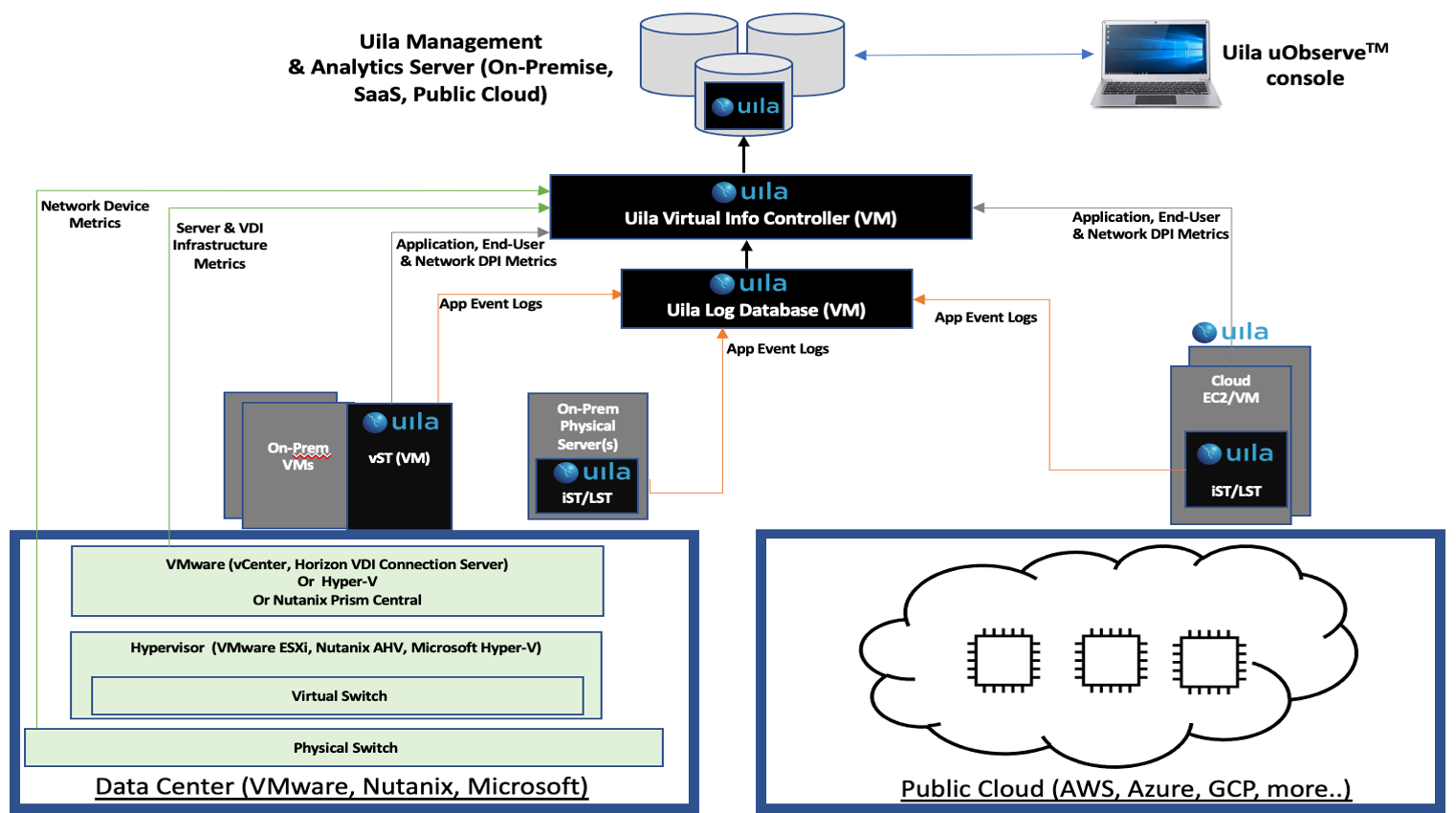 The core of the Uila virtual infrastructure architecture is a big data store and analytics engine that is designed from ground up to scale-out to accommodate large data center deployments with thousands of servers, to scale-in to record data in high resolution, maintain historical data while maintaining real time responsiveness. Built-in redundancy offers high availability, mitigates downtime, and reduces maintenance overhead. UMAS can be installed in the Private, Public or SaaS Cloud.

Virtual Smart Tap (vST) is deployed in a distributed manner across the data center or the Public Cloud. The vST installs in the host (Private Cloud) or VM/instance (Public Cloud) as an efficiently designed guest Virtual Machine where it promiscuously listens to all traffic from the virtual switch or getting traffic from Uila’s Instance Smart Tap (iST) that traverses the virtual networks (North-South and East-West). Using embedded Deep Packet Inspection (DPI) technology, the vST identifies unique applications and their attributes.

The vST measures application response time,network latency, and other network performance data in meta data form. No packet payload is stored, thus removing the risk of exposing sensitive data. The vST passes this Application & Network Metadata to the Virtual Information Controller (vIC) for further processing and correlating with the infrastructure metadata collected by the vIC.

The vIC can be installed in either the Private or Public Cloud. In the Private Cloud, Virtual Information Controller (vIC) is the integration conduit to the VMware Horizon VDI infrastructure & Data Center Virtualization Management System e.g. VMware vCenter, Microsoft Hyper-V, Nutanix Prism Central/Element or OpenStack Controller. The vIC retrieves your infrastructure configuration as a template to build Uila monitoring domain and to streamline deployment. The vIC collects network, storage and compute performance metrics that are maintained by vCenter(or equivalent from Microsoft, Nutanix, OpenStack) and combines it with the application and network metadata from all deployed vSTs. In the Public Cloud, the vIC collects the Instance & VM level networking, application, compute statistics from the vSTs.
In both cases, the vIC securely transmits it to the Uila Management and Analytics System, either on-premise or in the cloud.

The Uila Instance Smart Tap (iST) is deployed as a plug-in in a distributed manner across the Public Cloud on the VMs or Instances running the application workload. It collects traffic as well as VM and Instance level Compute statistics and sends it to the vST for Deep Packet Inspection.

The Uila Logging Smart Tap (LST) is deployed as a plug-in in a distributed manner across the Data Center on VMs/Physical Servers and Public Cloud in the VMs or Instances. It collects logs from the server and/or application and sends it to the Uila logging server for further analysis.